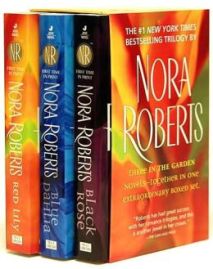 All right, so these aren’t technically on my bookshelf, but the next time I have some spare money in my pocket and I find this boxed set in a store, I will be adding it to my bookshelf.

I had never read anything written by Nora Roberts before reading the In the Garden series. I was looking for something different to read, and my friend gave me these off of her shelf to read.

My friend is into horticulture, so this series appeals to that part of her. I grew up helping my mom with her flowers around the house, and while I never got into it as much as she did, it did make me think back to those fond memories (watering flowers in 100 degree days, pulling weeds, getting scratched by Mom’s roses, picking dead buds off of perennials, running away screaming if a bee lazily wandered past…) In all seriousness, though, I did enjoy these books.

The books are all centered around three women, and each book is focused on a different one, though many of the same characters appear and play a role in the story of each book. (I love series that do that.) You definitely need to read these in order. From the back of the first one:

“Against the backdrop of a house steeped in history and a thriving new gardening business, three women unearth the memories of the past and uncover a dangerous secret–finding in each other the courage to take chances and embrace the future.”

Each is a love story in and of itself, thought there’s definitely more than that involved in each story. I personally like the third one best, because I love Hayley as a character. Each novel, though, has its merits. All three characters find a center around a gardening business at the Harper house and its ghost, the Harper Bride. In the first one, Blue Dahlia, Stella moves back to her roots in the south, taking a job at the nursery, after her husband is killed and she is left with two boys to raise by herself.  In the second book, Black Rose, Roz Harper, who owns Harper house and the business, hires a genealogist to find out more about, the ghost haunting her house, who is her ancestor. And Hayley, who is Roz’s cousin, came to Memphis looking for a job at the nursery and a new start for herself and her unborn child, and finds friends and possibly more in the third one, Red Lily.

If you’re looking for some easier but interesting reads that might remind you of summer in the middle of winter, that are good love stories to boot, pick these up.