Posted on May 1, 2016 by Brittany Westerberg — Leave a comment 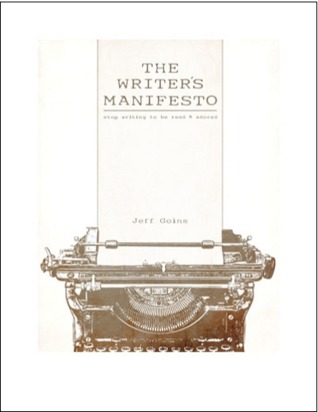 At my book group last month, we were reading Jeff Goins’ The Writer’s Manifesto (which is a good, quick read, by the way, that I do recommend). One of the sections in there really got me thinking:

“Real writers do not need inspiration or an audience to begin. … Real writers recognize that there is a hidden force. Acting upon them. Guiding them. And leading them. The wisest writers call upon this force, taking the time to learn how to wield it well. … But this is not an excuse to wait.”

My gut reaction to this? That you need inspiration to write. You need an idea, a spark, something to give you the story. Inspiration is important.

The point Goins was trying to make, though, is that if you sit around waiting for inspiration, you won’t find any, and you won’t ever write. Real writers write every day (or as much as they can, at least) because they simply can’t help it. They can’t not write.  If you only write when inspiration hits you, it never will.

Passive, in general, is bad when you’re writing marketing copy. It’s talking about something being done, rather than actually doing something. That’s the simplest way to describe it that I know. Think of “The dog bit the girl” vs. “The boy was bit by the dog.” The first is active, while the second is passive.

Grammar lesson aside, when we were reading the manifesto, I was put in mind of passive writing vs. active writing.

Active writing is, of course, actually writing. You’re typing, or using a pen, or however you write, but you’re getting words out there. You’re fighting through writer’s block, or working around being sick, or staying up to the wee hours of the morning because you want to get that one chapter finished, get that one idea out of your head. You’re writing.

Passive writing, I think, is waiting for inspiration to hit you. You might start something, think it’s crap, and throw it away. Or you leave and go do something else, because you can’t think of the right words to put on paper. You don’t force yourself to just sit there and write.

Active writing is forcing yourself to get words out, to spew them onto the page if you have to, because you know it’s what has to happen. You know that, somewhere in the crap you may think you’re putting on the page, a gem will emerge.

Passive writing is thinking about your story but never getting words out and written down. You don’t practice, you don’t make yourself sit down and write, because your muse is out of the office today, or this week, or this month.

Active writing teaches you to write through all obstacles, and makes you a better writer.

While inspiration is important, you never know when inspiration will strike. It could strike in the middle of your second cup of coffee. Maybe you’ll be inspired watching the man help his elderly mother up the stairs, or the three kids in the back seat of a 1990s Honda flip you off as you drive to work in the morning. (True story.)

Or maybe that spark of an idea won’t hit you until you’re in the middle of the third page of word sludge that you’re forcing through your fingers.

My point is, it’s important to keep writing, even if you’re not feeling particularly inspired. I’m guilty of passive writing myself. There’s always other things you could be doing, and the hope that inspiration will suddenly strike you and you’ll crank out that fantastic novel that you’ve been dreaming of will suddenly just happen.