Posted on April 4, 2012 by Brittany Westerberg — Leave a comment

This week’s “What’s on my bookshelf?” will go to my physical bookshelf, currently in the second bedroom of my two-bedroom apartment. It’s a little cluttered, as I haven’t taken the time to completely organize it like I would like. It holds books I have read dozens of times, books I’ve recently read and ones that I will get to eventually. 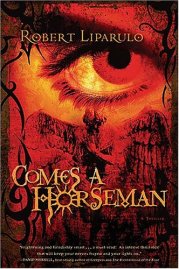 Two of the books are Comes a Horseman and Germ, both by Robert Liparulo. I borrowed these from my brother. Well, he more so made me borrow them, saying that I would really enjoy them. Since he and I normally share similar tastes in books, I said I would give them a try. I haven’t gotten to read them yet, but I’m hoping that I will be able to get to them soon.

The description of Comes a Horseman reads: “The ancients saw Death as a blazing figure on horseback, swift and merciless. Those facing the black chasm often mistook their pounding hearts for the beating of hooves. Now, two FBI agents pursuing a killer from a centuries-old cult realize they have become his prey.”

The description of Germ reads: “If you breathe…It will find you. The list of 10,000 names was created for maximum devastation. Business leaders, housewives, politicians, celebrities, janitors, children. None of them is aware of what is about to happen–but all will be part of the most frightening brand of warfare the world has ever known.

The germ–an advanced form of the Ebola virus–has been genetically engineered to infect only those people whose DNA matches the codes embedded within it. Those whose DNA is not a match simply catch a cold. But those who are a match experience a far worse fate. Within days, their internal organs liquify. Death is the only escape.

The release of the virus will usher in a new era of power where countries are left without defense. Where a single person–or millions–could be killed with perfect accuracy and zero collateral damage. Where your own DNA works against you. The time isn’t coming. It is now. Pray the assassins get you first.”

Both sound extremely interesting, and are definitely books I would have picked up anyway. I’m hoping to read them by this summer.

So far, I’ve only listed books on my shelves that I haven’t read yet (though I started reading Kim Harrison‘s first novel in the series this past weekend). That’s not my intention. I also want to tell you about books I’ve read and why I like them. 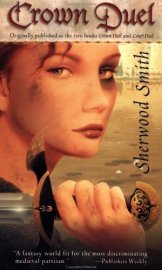 I’ve lost count of the number of times I’ve read Crown Duel by Sherwood Smith. It was originally published, I believe, as two separate books, but my well-read copy combines the two into one book. I picked this up in high school, and ever since have picked it up again when I’ve needed cheering up or just wanted something comforting and familiar. There have been a couple people who have told me that the book has every stereotype conceivable in the book, but I don’t care. It’s different from other stories, and I’ve just always liked it.

The main character, Meliara, is pretty much real. She’s not perfect. She doesn’t really have any special skills. She’s trying to make her country a better place. More often than not, though her heart is in the right place, she messes things up.