Home › Book review › The Hobbit: Better than the Lord of the Rings?

The Hobbit: Better than the Lord of the Rings? 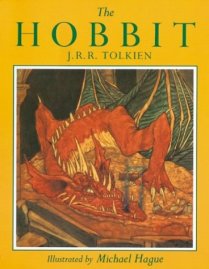 I got The Hobbit when I was pretty young. I don’t remember who got it for me, whether it was my parents or another family member, but it will be one I keep with me for a very long time.

I was given the illustrated edition, and let me tell you, the illustrations are good. They don’t compare to the scenes flowing through my mind as I pored through the book, though, what with Tolkein’s detail-rich descriptions and fantastic story line.

You’ve probably heard of J.R.R. Tolkein. He also wrote the Lord of the Rings, an epic trilogy which, as you most likely know, was made into a movie trilogy in the early 2000s. Maybe you also know that The Hobbit is also now being made into a movie. You probably don’t know … and can’t imagine … how excited I am about that.

I’m more excited than I ever was about the Lord of the Rings being made into movie. Maybe it’s because that, while the Lord of the Rings is a fantastic epic story, it’s almost too epic. I read it in high school, and I reread it a couple of years ago. I realized after I reread it that I was almost too young to have read it back in high school. I wasn’t mature enough to truly comprehend the story. (I’m still not sure if I really am.) That’s how epic this epic is.

The Hobbit, on the other hand, can be enjoyed by both the young and the old. I read it when I was young, and have reread it since then, and I wouldn’t mind rereading it again before the movie comes out. I know of one woman who is reading it to her children – ages 9 and 7 right now – and they’re loving it. It’s an amazing story, and one can expect no less from Tolkein, but it’s more of an adventure and less … well, I don’t know another word for it: epic. I think that’s why I like it better. I still want to make my way through the Lord of the Rings trilogy again before I die, but I know I will reread The Hobbit a few more times.

Watch the trailer for The Hobbit here.

“Bilbo Baggins is a hobbit who enjoys a comfortable, unambitious life, rarely traveling any farther than his pantry or cellar. But his contentment is disturbed when the wizard Gandalf and a company of dwarves arrive on his doorstep one day to whisk him away on an adventure. They have launched a plot to raid the treasure hoard guarded by Smaug the Magnificent, a large and very dangerous dragon. Bilbo reluctantly joins their quest, unaware that on his journey to the Lonely Mountain he will encounter both a magic ring and a frightening creature known as Gollum. Written for J.R.R. Tolkien’s own children, The Hobbit has sold many millions of copies worldwide and established itself as a modern classic.”

3 comments on “The Hobbit: Better than the Lord of the Rings?”