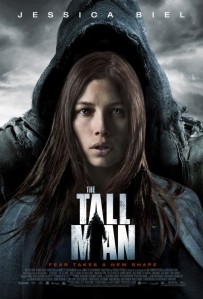 On Monday, my husband and I sat down to watch a scary movie. It’s Halloween time, and it was the only day we had nothing planned in the evening. We had narrowed it down to two: The Grey with Liam Neeson, and The Tall Man with Jessica Biel. My brother approved of The Grey, and I thought it would definitely be scary for me, because I’m super scared of wolves. (I have been since I was a very young child. Don’t watch The Never Ending Story when you’re that young.)

We decided to watch The Tall Man. I was glad we did. While this movie wasn’t truly horror or really scary (except for the part with the dog that attacked her, but that was just scary for me, because it’s related to my wolf fear) it made you think. I won’t give away a bunch of spoilers, but more than once, my husband and I looked at each other with looks on our faces that were truly “what is going on” looks.

The movie starts out with a nightmare for any parent: children are going missing. There’s something or someone in the woods, that the town has dubbed “The Tall Man,” that is taking people’s children. No one knows who or what is truly going on, which is part of the suspense of the movie. Then, when Biel’s character’s son is taken, the story takes one twist, and then another, and then another, and it ends up in that gray area of morality where you’re a little uncomfortable, a little horrified that this is happening but at the same time you want to quietly support what they’re doing. It makes you ask that question: do the ends justify the means?

I remember watching Jessica Biel in Texas Chainsaw Massacre, and I’ve always thought that she is a great actress. One reviewer on Rotten Tomatoes wrote, “Leaving behind any trace of her eye-candy image, Jessica Biel delivers the performance of her career in The Tall Man.” While the movie received mixed reviews there, for the most part, you can’t argue with Biel’s performance. She’s both beautiful and a good actor. The end was a little heart breaking for me, that she believed in something so much.

This review has got it right:

“Its signature scenes get their power less from blood than from pure desperation. In one extended sequence, Biel tries frantically to retrieve her child from his kidnapper. In another, she resolutely tracks them both down to a half-hidden horror house.

Biel, an underrated actress, is perfect for the part, both emotionally and physically. She’s always had a kind of rough strength underneath those sculpted cheekbones, and when you see her chase a van down the highway, you know she’s going to catch it.”

I like it when an actor, male or female, takes on something that is a little different, in a movie that is risky. Not everyone liked Michael Clayton, because it made you think, and that had George Clooney in it. Some people don’t want to think about a movie; they just want it laid out there, so you know exactly what’s there. I appreciate movies that make you think, though, and I appreciate when filmmakers don’t just try to feed us the same old story lines and crap.