Home › notes › Time for a change

Time for a change

Posted on March 11, 2014 by Brittany Westerberg — Leave a comment

I woke up this morning at 4:30 a.m. from a dream that inspired me and had me itching to write. I knew I didn’t have time to really work on it, but I did write down everything I could remember (and questions that came to my mind that I knew I would have to answer when I wrote it).

That’s all I’ve been doing the past six months. Writing down ideas, toying with other ideas, slowly working on the draft of my third novel. My second is still with the publisher, who has run into some unforeseen circumstances which have delayed printing of my book (among others). I haven’t taken the time to write a post because of how disheartened I’ve been. Though I tried to keep going, keep my spirits up, it’s been disheartening. Add into that a change in jobs, some health concerns and other demands on my time, and I haven’t made it a priority to write blog posts, let alone really work on my novels.

For some reason, the dream this morning really got me to thinking about how lazy I’ve been with my writing. Though I’ve made some progress on my third novel, I should have had at least a draft finished by now. There’s no excuse, even if I haven’t felt like it. If I really want to become a full-time writer, I have to treat my writing now as a part-time gig, one that I still have to devote 10-20 hours a week to. There’s no excuse not to.

I know I’m not the only writer out there who has gotten discouraged or hit a point where they felt like it might not be worth it to write. However, it’s not about whether it’s worth it or not. Writing is something I love, something that brings me joy. Bringing those stories to light, putting the words on paper, is worth it to me, even if no one ever reads them.

So I’ve set myself a goal this morning: finish the Leora series this year. I have the third book half done, and I have a fourth one to write to finish it off.

There’s no reason I can’t do it. Yes, I have four weddings in the next three months (one of which I’m involved in as a member of the family, another a bridesmaid and in a third I’m the maid of honor). Yes, I have several dozen demands on my time that will make me want to set aside writing that day to work on something else.

No more excuses, I’ve decided. By the end of 2014, I will have a draft of the fourth Leora book done.

I’ll leave you with a fun pin I found today, that sums up what I’m sort of feeling. 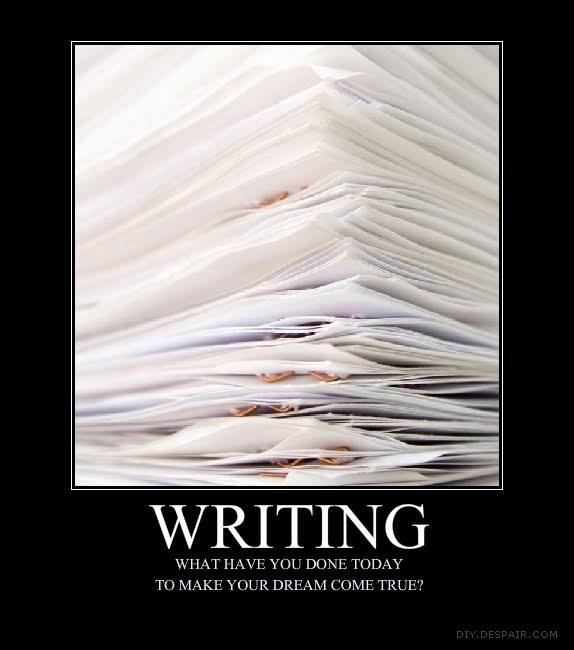