Posted on February 18, 2013 by Brittany Westerberg — Leave a comment 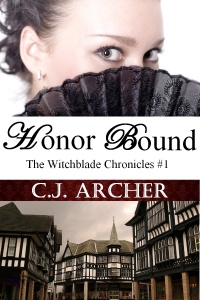 Over this past week and a half, I’ve enjoyed two books from author C.J. Archer and her series, The Witchblade Chronicles.

Those who follow this blog know that I enjoy romances usually as a way to pick me up at the end of a bad day. I read them to giggle over in between more thought-required novels. While these were definitely easy to read romance novels, the story in each of them is very good. I enjoy historical romances the most, usually, so these were right up my alley.

These also had a hint of the paranormal in them as well, with the main women in them having some powers. It’s a side plot, though, really, and only adds to the story. There were a few times where they were able to save a life, or throw something or someone, but nothing epic or truly strange. I liked that it wasn’t the overarching theme, but merely something to add interest and another level to the characters.

I picked up Book 1, Honor Bound, free sometime last year. Here’s the synopsis off of Goodreads:

Isabel’s quiet life as an assistant to one of London’s famous apothecaries hides a deadly secret. A secret that could see her put on trial for witchcraft if the authorities uncover the truth. But when the authority figure who turns up at her shop is Sir Nicholas Merritt, she’s at risk of losing more than her life. She could lose her heart and soul, and the man she loves.

Royal spy Sir Nicholas Merritt can’t believe his luck when he stumbles upon Isabel during an investigation. He’s been searching for her for seven long years and now he has her again, in his bed and his life. Except she’s resisting all the way. Worse still, she’s somehow tangled up with a plot to assassinate the queen. To hold onto her this time, he must find out why she left him while hiding a secret of his own that could tear them apart forever.”

Both the man and woman have their own secrets, and neither truly trusted the other enough to let them in, which is why they were torn apart. She had to leave in order to really grow up, to find herself and an inner strength she didn’t know previously that she had. He had to lose her in order to discover his real priorities, and how much he truly loved her. It made me think “ohhh” in all the right parts. 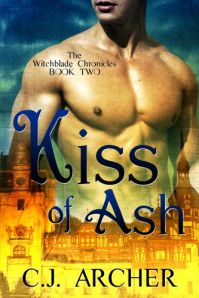 I bought Book 2, Kiss of Ash, because I enjoyed the story so much and wanted to read some more of Archer’s writing. Here’s that synopsis:

“Pippa Ingleside will do anything to escape her ruthless uncle, but even she is surprised when her previously dormant powers aid her. Surprised and afraid. Her newly discovered abilities may have saved her but they condemn her at the same time.

Disguised as a boy, she travels to the home of Lord Ashbourne to find her one and only friend. To maintain her disguise and put a roof over her head, Pippa accepts a job as page of the wardrobe to Ash, a man as mysterious as he is dangerous. If he discovers her lie, he’ll send her back to her uncle and her witchcraft will be exposed to the authorities.

As the lies build it gets harder for Pippa to maintain her disguise, especially when she falls in love with the man she must serve.

Her only hope is to find her friend. But when the friend is murdered, Ash investigates and where he goes, his page goes too. Together they uncover a web of secrets that could destroy Ash and condemn Pippa. But that’s nothing compared to what happens when he discovers she’s a woman…”

I enjoyed this one just as much. It incorporated one character from Book 1, Lord Ashbourne, and mentioned others, but other than that, is a completely separate novel. I could have read this one first and not been confused at all. I liked Pippa (Philippa, is her full name). She was young and naive, but at the same time quick witted and interesting. This one also made me think “ohhh” in all the right parts.

While I have to comment on the decent amount of run-on sentences in this novel (I think the author writes like she speaks), it wasn’t so detrimental that it took away from the book for me. I noticed it and moved on with the enjoyable story. If you’re looking for some good, easy to read romances, I would definitely pick these up.