There are definitely times when I really enjoy reading books that are different.

I recently read a blog post about reading books outside of your comfort zone. It has a couple good lists of books that you should check out, and not all of the books in those lists are the same genre, or writing style, or anything.

Everyone should read something different a couple times a year, in my opinion. Sure, we all have our favorite genre or author or writing style. Branching out, however, won’t make your love for that genre/author/writing style any less. It won’t make that genre hate you, or that author tell you that you are a horrible person. Reading something outside of your comfort zone will only add to your brain. It might give you new ideas, or teach you to think differently about something or consider something you might not have otherwise.

Controversial books are ones that definitely give you new ideas or thoughts or feelings. Obviously, considering the fact that I want a library in my house someday, I detest the idea of censoring books. It’s censoring ideas, and should be protected under the right of free speech, because books are ideas put to paper. While I do agree that some young children should not be allowed to read books aimed at older audiences, it’s the same principle as with movies: parents, look at what your child is reading or watching and pay attention. 101Books blog recently wrote a post about this same thing.

Even the most detestable books in history have something they can teach us. Maybe it’s simply, “You really, really shouldn’t be like this person or do what he or she did.” That’s still something. Hiding it away isn’t going to make the ideas go away. Placing our children in a bubble with no context and no idea about how the world really is isn’t going to help them later in life. It will have taught them that there is only one way to think, only one way to do things. 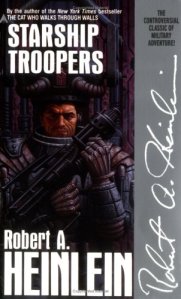 I just finished reading Starship Troopers by Robert Heinlein. (Please don’t think the book is anything like the pitiful movie from the ’90s that bears the same name. Basically the only similarities are the name, the enemy they’re fighting and the main character goes into the military against his father’s wishes.)  It is a controversial futuristic novel, which I can understand. While it tells of a future where people have to volunteer for some military or public service in order to become “citizens” who can vote, and some say that it advocates fascism or militarism, there were a lot of smaller ideas in there that I can agree with, honestly. There are definitely some thoughts about raising children that I agree with. There is also a quote that I wrote down, because it summarizes another controversial belief of mine: “There are no dangerous weapons; there are only dangerous men.”

Really, though, it doesn’t matter whether everything in the novel speaks to you (as not everything in this novel spoke to me). The idea is that it’s supposed to make you think. Think about your beliefs and really decide what you believe. Even if the writing makes you a little bit uncomfortable, that isn’t necessarily a bad thing. You can’t truly make a decision if you’ve only ever heard one viewpoint your whole life. So next time you’re looking for something to read, pick up something you might not have read otherwise. Maybe pick up a book that’s been banned in some libraries or towns in the world. Whether you like it or dislike it, it will have influenced you in some way, and that is definitely a good thing.

2 comments on “Reading something different”